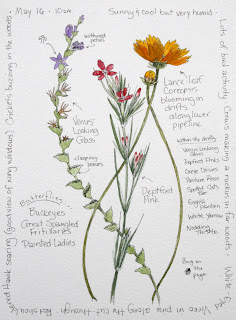 The dogs had a despondent look about them this morning, as if they'd given up once again on going out on a nice long ramble.  I know how they feel!  Lately, many things have kept me away from journaling.  But this morning was cool and sunny and there were no plans for the day, so off we went.

Many birds were out today: Indigo Buntings sang from their perches along the trail, Goldfinches twittered, a pair of Downy Woodpeckers searched for goodies on a dead branch. A group of about six birds were making strange gurgling calls to each other, but before I got a good view they flew to another tree, and then off to the woods.  It is so  frustrating to be stuck on the ground in a human body and not be able to fly up to where I could identify them.  While I was looking up at them though, I spotted a Red-Shouldered Hawk soaring above me, his wing windows shining bright in the morning sun.

I followed the dogs downhill where I looked for a place to sit in the shade, only to find the Coreopsis I wanted to draw were already in the sun. Drifts of Coreopsis are bright and showy now, and even though you don't notice right away, hiding within the drifts are many other flowers: Deptford Pinks, Venus' Looking Glass, Spotted Cat's Ear, Southern Ragwort, Pasture Rose, White Yarrow, English Plantain, and more.  Butterflies were busy sipping: Great Spangled Fritillaries, American Painted Ladies, Buckeyes, various skippers. I sat in the middle and wanted to draw it all!  However, I didn't count on the heat of the sun at 10:00 a.m., nor did I count on the number of bugs that found me.  Not biting ones, thankfully, but they still tickled and bothered me, so I only got a few flowers drawn.

On the way home I heard a distinctive song I didn't recognize, but was able to remember it by saying, "Quick, three beers, Chick!"  Try as I might, I couldn't found the bird through my binocs, so I finally called my birding friend and described the song.  "I think we went through this last year," she said, "and it turned out to be a White-Eyed Vireo."  She was right - when I got home I found a song online that was very close. Thank you (again), Susan!

As the tired dogs stretched out on the cool floor for a nap, I grabbed my binoculars and tiptoed outside to watch the birds in my garden around the house. My favorite sighting: a White Breasted Nuthatch fledgling being fed by the daddy Nuthatch. 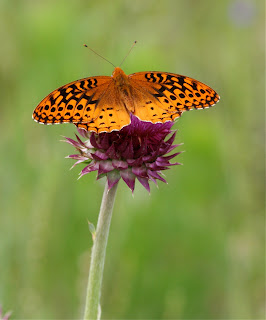 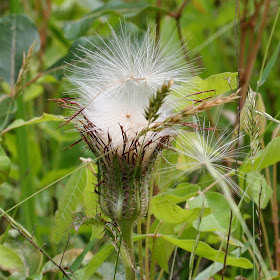 One of the Longhorn beetles on Daisy Fleabane 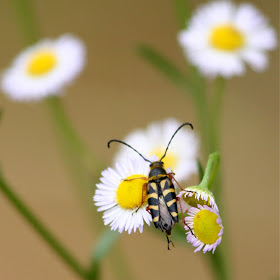 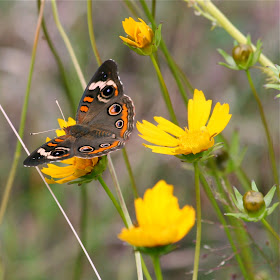