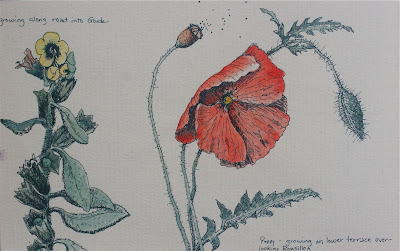 Provence is known for acres of poppies in spring that can turn an average olive orchard, say, or even a bland roadside into a magical place.   Here is a single poppy plant from the front yard of our farmhouse.  I think it's good to study just one flower so as to better understand the magic of the field-full....the vivid red tissue-thin petals held aloft by such a long, skinny stem, the ragged leaf, the bristly bud and sculptural seed pod...   The other flower I never identified.  I guess I'll just have to go back and try again!
Posted by Helen at 10:17 PM 1 comment: 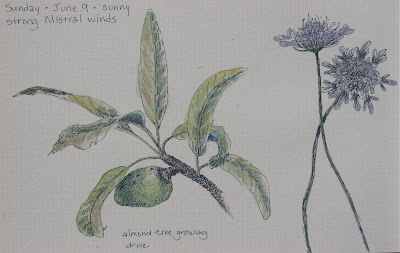 For the record I'm still alive and well and living at Middlewood!  I went on a vacation with my family and returned to find that the deadline for a big project I'm responsible for has been moved up by a few weeks.  I still take walks, but the wandering and journaling has been put on hold until the project ends in mid-July.  (I think this means I'm living in the REAL world for a while.)
To thank you for your patience I plan to post some old journal drawings from one of my trips to Provence.  Travel journaling is a wonderful way to soak in a new place, and the best of souvenirs!
Our favorite place to stay is a wonderful old farmhouse outside of Gordes, a perch village overlooking the Luberon Valley.  It is at the end of a long driveway off a tiny country road that winds along the side of the hill and through olive groves, open fields full of wildflowers, and weathered stone walls. The almond tree (above) is just outside the stone wall and columns that support the creaky iron gates to our house.
The small, handmade journal I used has buff-colored Canson paper.
Posted by Helen at 9:13 AM 2 comments: 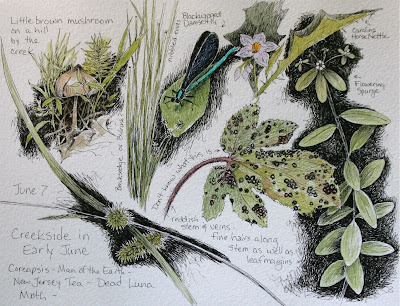 The morning was cool and fresh with a breeze blowing from the east, which means into my face, as I headed downhill towards Meetinghouse Creek.  There were no gnats swarming around my head, a big plus in summer, and some new blooms to admire: New Jersey Tea bushes are covered in lacy white flowers today,  more than I ever remember seeing, and there are still some Coreopsis spotted throughout the pipeline grasses and leaves.  Best of all, I noticed the delicate blooms of Clematis Viorna dangling from low growing vines along the forest edge.
On the way downhill I found some interesting mushrooms, one patch an intense orangey-yellow ones, and a white one still in button stage, also found a dead Luna Moth lying flat on the path.  It had obviously been there through some rains as it was still whole, but its pale green wings were already partially disintegrated, where nature doing her job of breaking the moth down and turning it back into earth.
It was fun observing the activity around the slow-moving creek.  Bees, beetles, ants, as well as dragonflies, damselflies, and butterflies buzzed, hummed and clicked all around me.  The most beautiful of all was the male Black-winged Damselfly that flitted about and landed right in front of me.  I think he just wanted to show off to somebody.  His body was a most shocking turquoise not often found in nature. When he rested on a leaf I could see that he also had a patch of turquoise on his head.
Spent a couple hours messing around and drawing by the creek, then back to the house to begin packing for our vacation.  If the house has internet I will post journal entries from the SC lowcountry during the week.  Otherwise, check back next Monday!
Posted by Helen at 3:46 PM 1 comment: 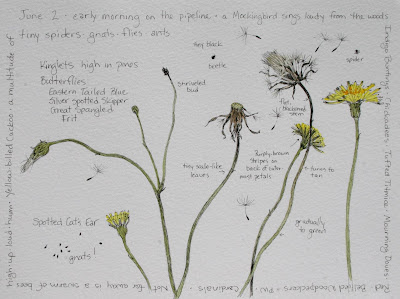 You've got to love Mockingbirds!  On my walk this morning there was one singing from a Poplar on the sunny edge of the woods. He was so full of himself, singing everyone else's songs. I walked toward the creek on the cool, shady side of the pipeline and enjoyed his music, as well as the chirrrrr of field crickets, the buzzing of bees, a Yellow-billed Cuckoo's monkey-like call, the clear notes of Cardinals, and Chickadees calling chick-a-dee-dee-dee-dee!  The scents of summer were everywhere, one spot heavy with a musky sweetness I could not identify, nor could I find a source... another mystery Mother Nature will keep for today.
Down by the creek Eastern Tailed Blue butterflies drank from the sandy edge of the stream, and a Great Spangled Fritillary sipped nectar from Butterfly weed.  White Yarrow is blooming down there now, and Horse Nettles, too.   All the while the Mockingbird sang!
Just as I settled down near the creek to draw a Horse Nettle in bloom the breeze died and, as usual, this is when the gnats showed up. Biting gnats.  I couldn't stand it. I finally had to get up. I decided to go back uphill and check out the breeze situation up there.
There was a steady breeze from the south at the crest of the hill so I sat down and decided to draw the Spotted Cat's Ears that are growing there and in various states of blooming and producing seed.  While I drew many small spiders visited me, either creeping tentatively across the page or dashing so quickly I thought perhaps I'd imagined it. As well, a tiny black beetle came to check out my drawing, walking, stopping to look around, walking, stopping, walking... ants, (some large) flies, bees - a cricket landed on me. An orange-ish folded-wing-skipper (not as bright as a Fiery Skipper) landed on the bloom I was drawing, took a quick sip, and was gone.
Towards the end of my drawing the Mockingbird stopped singing and it was suddenly so peaceful!  I was reminded that once I compared a Mockingbird  to a loud radio with a boy at the knobs constantly changing the stations so that you get to hear snippets of songs, but not the satisfaction of hearing the whole thing.  I immediately heard other birdsongs that had been drowned out by the Mockingbird: Indigo Bunting, Red Bellied Woodpecker, Tufted Titmice, and the soft zeeeet! of Golden-Crowned Kinglets from high in a pines near where I sat.
Posted by Helen at 7:48 AM 2 comments: