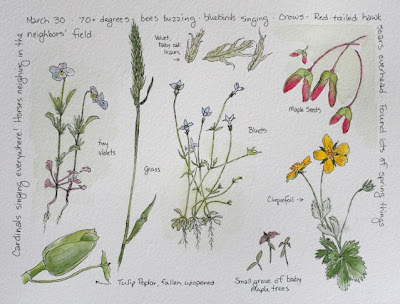 Went out for a journaling walk for the first time in quite a while.  I took my notebook and pen and headed out with both dogs. Big mistake.  All went well as long as we were walking, but on the far sunny hill, with a warm breeze in my face, I found a tiny patch of bluets waving in the wind. Radu and Daisy were frolicking at a distance so I put down a little mat and sat to draw. One bluet bloom later I had a puppy in my lap and a big dog nosing around in my bag for the expected treat I always give him.  I took care of that, including giving a treat to Daisy, and they settled down a bit.  I opened my pen.  Immediately I had to fight off the tiny puppy teeth that wanted to chew on the top.  No, Daisy, I said.  Then she thought my notebook would be a good chew.  I gave her a small beaver stick I found in my bag from some other hike.  Chew this, I said.  After about two minutes she got up to explore other things.  Whew!  A minute to draw! Bluets, cinquefoil, violets, grass... The next time I looked up there was no Radu, no Daisy, just silence.  A Carolina Wren started singing at the edge of the pipeline, a bee buzzed past my head, and I saw a red-tailed hawk soaring over the creek.  No dogs to be seen or heard.  Sigh...
I called and called and called until Daisy finally came through the woods, down from the direction of the high rocky ridge. Radu didn't show up until much later.  We immediately went home and put Daisy up, and because I was determined to have a successful day, I called to Radu and headed back out to draw in the woods.  Radu did his usual patient snoozing and we both enjoyed the peace.
From now on it will be nap time for Daisy when I want to draw.
Posted by Helen at 4:51 PM No comments: 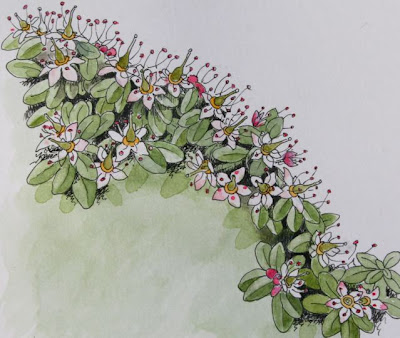 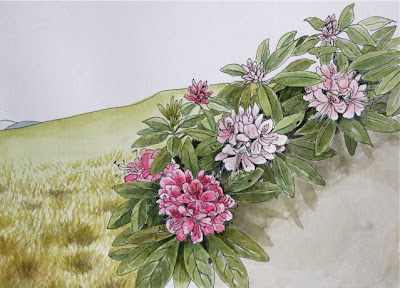 I am almost finished with the illustrations for my latest article, this one on Mountain Balds (a few of the eight spot illustrations shown above). The only thing left is the final tweaking, and mailing it away.  We have been walking daily, but with a puppy in tow it is impossible to sit down and draw, which is ok since I don't have time to do that right now.  Soon I will walk twice - once with the dogs, the second time I will leave Daisy in the house so I can continue my Middlewood Journal entries.
Spring is everywhere. Baby Dogwood blooms are taking shape, a cherry tree fallen in the snow is sending out buds, violets are blooming in the front yard, the Clematis vine has grown foot-long stems.  Birds are crowding the feeders and singing their hearts out, looking for mates.
Such a happy season!
Posted by Helen at 8:35 PM No comments: 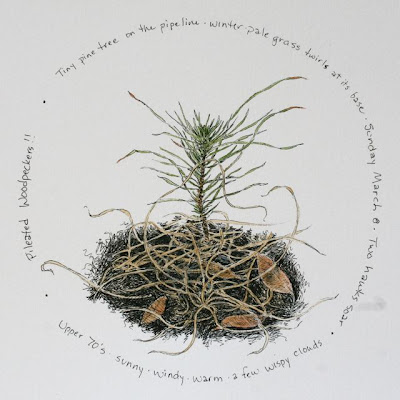 It's hard to believe the difference a week can make weatherwise. Last Monday we trudged around the woods and fields of Middlewood through six inches of snow.  The heavy wet snow broke limbs, brought down trees, and interrupted power service for exactly three days.  Record cold temps dropped to the teens at night through the week.  It gradually warmed, and yesterday and today have been hot and sunny - temps in the eighties, butterflies flitting about, the dogs panting under their winter-thick fur.
Yesterday, Radu and I hiked out to the pipeline late in the afternoon, around 6:00.  The sun was still warm then, but the shadows were considerably cooler, especially when a wind gust would blow in from the west.  By gauging how much room the sun had left before disappearing, I found a sunny spot to sit and draw.  I had about 45 minutes before the sun dipped behind tall pines along the pipeline's edge. Radu settled beside me as I drew the miniature pine tree that grew at my feet.  The pale grass curled and looped in a beautiful way, but it was hard to see in the dying light.  The wind blew my hair about, and Pileated Woodpeckers called occasionally from two directions.  I could hear Spring Peepers and Chorus Frogs in a nearby wetland.
The big news at Middlewood is our new canine addition, Daisy.  She's 10 weeks old and very interested in doing anything her mom and Radu want to do.  She has already hiked with us to the end of the pipeline and back, which is a long way for a puppy, but she seemed to enjoy it. Meetinghouse Creek gave her pause, though.  It was obvious she'd never seen such a thing as a creek.  She also stopped to investigate every pine tree brought down by last week's snow.  She gnawed on bare limbs, sniffed pungent needles, and swatted at pine cones.  Everything in a puppy's world is so fascinating!
Check out Daisy's photos on right.
Posted by Helen at 3:05 PM 1 comment: 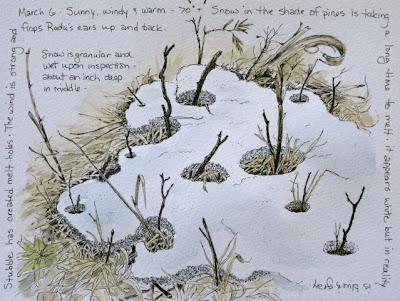 Last Sunday's dramatic thunder snowstorm is almost a memory, but not quite.  In the deep cold shade of pines around Middlewood can be found islands of melting snow.  I like to see the way the brier, rose, and grass stubbles warm and melt the snow immediately around themselves, making tidy little holes in the snow. On yesterday's hike the entire pipeline was covered in holed  snow, and it wasn't just stubble, grass, and small stumps that I discovered in the holes. In one there was a dead Meadow Vole, five or so inches long with sleek and shiny gray/brown fur and hairless tail.  He looked like he was just taking a nap.  In another snow hole was a dead Song Sparrow.  Today, however, there have been no unhappy surprises, and the snow is melting fast. The high was 70 degrees, but in the sun it felt even warmer.  It was windy, though, so a light fleece jacket felt good.  Radu's hair blew straight up on his back and his ears flopped up in the stronger gusts.  He didn't seem to mind.  As usual, he waited patiently for me to finish drawing.
For the record, having thunder, lightning and high winds during a heavy snowstorm is quite strange. FLASH! BOOM! rumble rumble. I have never seen such huge snowflakes in such abundance. We kept running out to the side porch where we could look straight up into snow falling in the floodlight, then back inside to warm up and watch the snow pile up on the deck. It was amazing!
Lines down and a three-day power outage was the price for all that beauty.
Posted by Helen at 4:02 PM No comments: