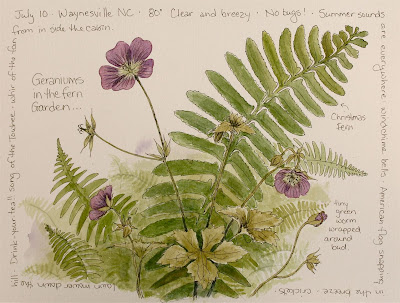 This post was created Saturday in the front yard of Apple Tree Cottage, in the delightfully cool mountains of North Carolina. A strong, clean breeze blew from the west and played harmonies in the windchimes hanging below the porch roof. I was sitting in my vintage garden chair gazing at this scene in the fern garden. The garden is all that's left after the huge apple tree had to be cut down two years ago. We hated doing it, but the old tree that dated back to one of NC's first apple orchards here on the hill, was nothing but a fat trunk with one live branch sticking out at an awkward angle to rest on the cabin's tin roof. Ivy, planted years ago, had crept up the trunk and across the branch. This branch still dropped withered fruit occasionally, but the main trunk was mostly dead. It leaned a little more each time we visited.
After the tree was hauled off we added more Christmas Ferns to the circle, enhanced the border with more rocks, and planted other flowers as the summers passed. Now the mostly shaded garden is also home to Forget me nots, impatiens, a lovely woods aster that volunteered, Wild Basil, and Cranesbill Geraniums. (The ivy is slowly being removed.) And off to one side of the garden, bravely growing from some old forgotten chunk of rootstock, is a foot-tall sprout of the apple tree for which our cottage was named.
While I drew in my journal Towhees sang from the trees, a crow cawed from a very near branch. Cicadas started buzzing, and two Tiger Swallowtails fluttered lazily around in the sun. Ben pulled out a can of barn-red paint to touch up the front railing near the old sign (it came with the cabin when my parents bought it 35 years ago) that spells out the cabin's name, Apple Tree Cottage. Other than this nothing much happened all afternoon.
Posted by Helen at 2:55 PM 2 comments: 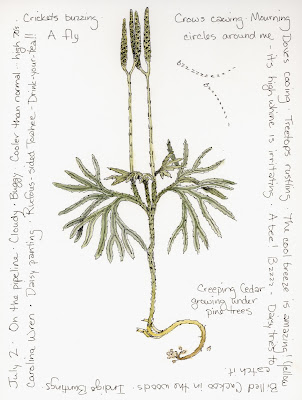 A front came through yesterday, bringing with it breezes, cooler mornings, and milder afternoon temps. Today it feels like fall, not mid-summer. Daisy and I headed out for a walk at around 10:00 a.m. I meant to make up for being out of town so long and give her a long walk, but instead got waylaid at Meetinghouse Creek admiring the Meadow Beauty that grows low and close to the water. I sat down and tried to begin a drawing when the breeze stopped. A thousand gnats came out to visit. Daisy, who had settled on the hill above me, still had a breeze riffling through her long coat. Hmmm....I thought. Something wrong here. After repacking my bag I grabbed my sit-upon and headed to a higher elevation, along the cool and shady side of the pipeline where I'd noticed the Creeping Cedar "running" under a patch of pines. The breeze was strong, so there were no bugs. I sat.
Crickets buzzed in the treetops, many birds, including my favorites, the Yellow-billed Cuckoo and Mourning Dove, chirped and sang. The only excitement came when Daisy took off running straight uphill after hearing a white tailed deer "coughing" in the woods to announce a danger we couldn't see. She was soon back and tired out enough to take a nap at my side.
It was great to be outside again.
Posted by Helen at 3:18 PM No comments: 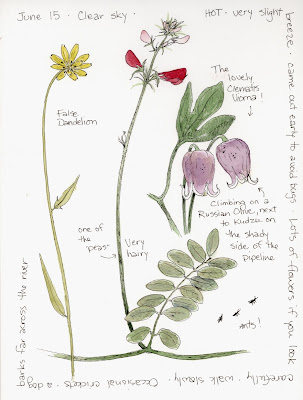 You will notice that this is a journal entry from mid June - proof that I have at least been trying to squeeze journaling time into my days. The fact that I am only now posting it (on July 2) is proof that I've had some trouble doing it regularly. Please, enjoy this entry, and then check back soon for today's post!
..
Posted by Helen at 3:04 PM No comments: