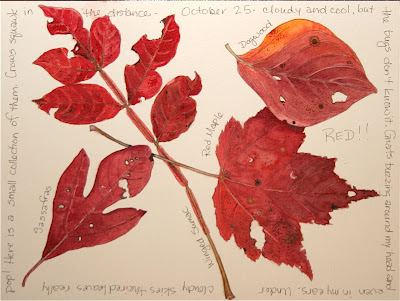 The cloudy skies set off the leaves' beautiful colors this afternoon. The yellows of the hickories, poplars and maples glowed like they had a lamp inside them, but the reds outshone them. The Red Maples are in full (red) leaf. The Sumacs are shorter but grow in mass along the pipeline and therefore make quite a show of orangy-red. Dogwoods turn a purply shade of red, to contrast with their shocking orange-red berries this time of year. Sassafras trees turn various colors depending on the light available where they grow. Some are a school-bus yellow (like the hickories), some are orange, and some, like the small tree from which I picked this leaf, are deep red.
Red, yellow, orange... whatever their color, the trees in the Piedmont of South Carolina are putting on a beautiful show right now, and I love it. Fall is my favorite time of year!
Posted by Helen at 10:29 PM 4 comments: 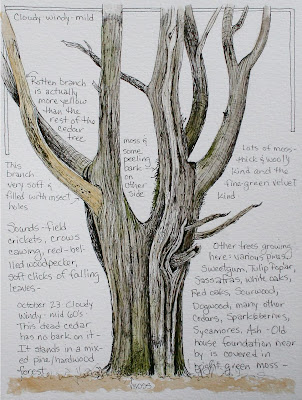 The maples and sourwoods surprised me this morning as the dogs and I headed out for our walk. I didn't realize how much they'd turned. Could some of this color change have happened overnight? Or maybe today's heavy clouds accentuate the bright reds and yellows. The wind definitely makes the leaves shiver and shimmer and look downright energetic!
Daisy, Radu and I headed down to the lower woods, where an old homesite lies under years of fallen leaves. The foundation stones are moss covered, and all that remains of a barn is one corner's logs cut to fit like Lincoln Logs, and portions of the old tin roof, now on the ground and covered with leaves and compost. There were mushrooms galore in these woods, purple, red, yellow and brown, some buttons and some fully open. In this same area is this remnant of an old Redcedar - a natural sculpture rising from the leaf litter. It's beautiful enough from a distance, but up close it's amazing. Oak, Poplar, and Sweetgum leaves flew about in the wind and landed on me as I drew the old tree. I wish I'd gotten closer to the tree to draw it, although when I did get closer I saw that it would be an overwhelming task... and too much for today. Maybe some other day. In the meantime, a suggestion: stop occasionally and look closely at everyday things. Most will look completely different, not to mention totally amazing.
Posted by Helen at 2:29 PM 2 comments: 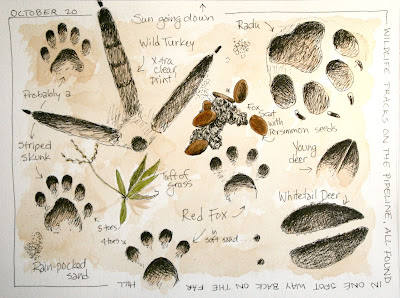 Late yesterday afternoon I hiked with the dogs along the pipeline. It was warmer than the weekend, but still pretty cool for mid-October. The late afternoon sun felt good on my back as we headed east. When I go to the top of the farthest hill, a spot where there's a pale orange, sandy stretch of path, I noticed what I think are tracks of a Red Fox. They were so - so- (bear with me here) so cute! and so clear in the damp sand, the shadows sharp due to the low sun. As I admired the fox tracks I noticed that a Wild Turkey had also walked through the sand. There was a soft track near the fox tracks, and more, clearer tracks nearby. I drew one of the clear ones that even showed the rough bottom texture of the turkey's foot.
Deer tracks are everywhere along the pipeline, even on the woodland paths around our house. It's interesting to note the size of the tracks and to picture the animal standing next to you. Some deer tracks are splayed wide and show, as well, the dewclaws - these are made by running and leaping deer. The print near where I was sitting had just small dots to indicate where the dewclaws would have been, and are pretty far back, so I'd say this is a deer's back foot print. The smaller and sharper print is from a small, young deer.
I finally got up and started studying the prints and counting toes, and soon realized that some of the small prints were not fox (four toes) but something else (five toes). I drew them and came home to look in my Animal Tracks book to id them. I'm not positive, but I think the five-toed animal could be a skunk.
The other obvious track in that spot was a REALLY BIG one, quite clear and deep in the wet sand! Oh... yeah. I happened to have some good track-makers with me on this journey. I think the big track belongs to Radu. Daisy's prints weren't represented in this particular spot.
Posted by Helen at 11:47 AM 1 comment: 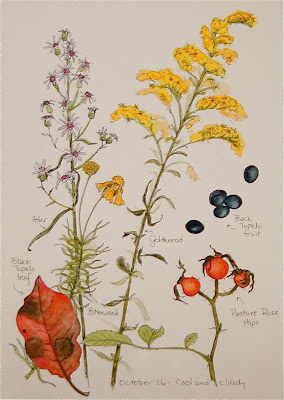 It was a cloudy afternoon that finally broke up and showed patches of blue sky and - yes - some SUNSHINE! The dogs and I headed out for a walk around 4, and as soon as I got to the pipeline I turned and stood with my face in the sun, loving the warmth on my face. The breeze was still damp and cool, and as I headed downhill toward Meetinghouse Creek, it was welcome as it kept the gnats away. We are deep into Mushroom time, and today it showed. They're everywhere! But it's also fall flower time, and the pipeline is full of the beautiful blooms of many asters, goldenrods, bonesets, gerardias, etc.. Today I chose a few more blooms to paint, and was forced to add, as well, the Black Tupelo fruit that was falling onto the pipeline, for their gorgeous deep indigo blue color. The leaves of the Black Tupelo were scattered around, as well, their rich scarlet coloring bright, beautiful and SO noticable. Goldenrod is everywhere, as are various asters. Don't know what this Aster is called. If I figure it out I'll post it!
Posted by Helen at 7:07 PM 1 comment: 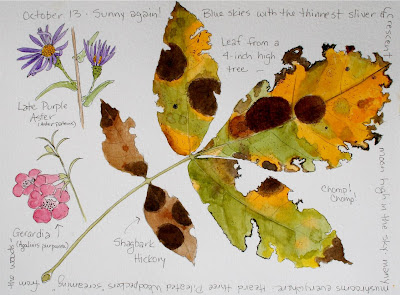 Beautiful sunny day! Yesterday's soaking rains are gone, leaving us with blue skies and a waning crescent daytime moon. While we were out this morning we walked under/into a flock of blackbirds that reminded me of the movie, The Birds! There were squawking and chattering so loud they didn't hear us crunch into the woods to look up into the trees. I could hardly hear the leaf-crunch myself. There were easily thousands of them. I walked all around under them and finally settled on the pipeline nearby so that I could enjoy the aviary feeling of being close to their noises and activity. Suddenly, they all stopped squawking at once and took off with a loud collective WHOOSH. They flew out and over the pipeline in formation and veered and rolled in the blue October sky like a school of fish in the sea. I was awed by the sights and the sounds of this beautiful flock. They whirred around over me for a few minutes before they disappeared. In the silence that followed I started hearing the usual woodland birds again - Chickadees, Titmice, Red Bellied Woodpeckers, Blue Jays, Pileated Woodpeckers, etc.
Posted by Helen at 3:11 PM No comments: 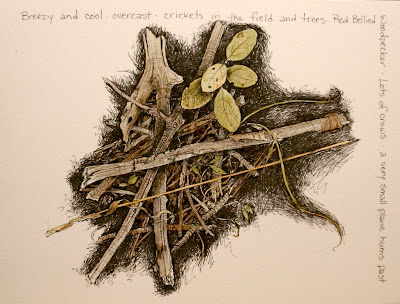 This is yesterday's post that didn't get finished until today! It was started out in a field full of fall asters, goldenrods, and bright red and yellow catbrier leaves. So why did I choose to draw a little pile of sticks on the ground? I honestly don't know. The flowers would have been easier.
The day was lovely when I started out on my hike, sunny and coolish with a slight breeze. But, once I stopped to draw the gnats came to visit. The irritating little biting kind. I waved them away for a while and was considering moving on without completing the drawing when a heavy cloud cruised in from the west and blocked the sun. The temperature dropped ten degrees (or at least felt like it) and the breeze became a bit stronger. The gnats then retreated to wherever they live during off hours. From then on the day was delightful once again and I drew for another hour or so, taking breaks occasionally to stand and stretch and enjoy the beautiful flowers I wasn't drawing. I finally headed home because I had other things I had to do, not because I was finished with the pick-up sticks.
Today there is a soft and gentle rain, ordered up by my grass-seed-sowing husband. It is just the rain to soften the dry flakes of Fescue seed and help them to germinate. The rain will also make the wildflowers happy. (See photo of last year's fall flowers on the right side of this page.)
I used today's rainy-inside morning to put a light color wash on my pile of sticks, but I think my next post will show off some of fall beauties growing out in our little prairie.
Posted by Helen at 12:23 PM No comments: