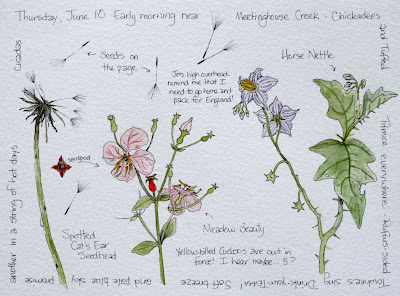 Today Daisy and I headed out early to beat the heat that has baked the upstate for weeks now. The sun was barely up and cardinals near our feeders were singing their hearts out! On the hill, Indigo buntings chirruped their musical song from the tops of the 40 year old pines that reforested the areas between the pipelines. These birds sing all day out there, but although they are usually high on a bare branch, only occasionally are they perched where I can see them. A flash of brilliant royal blue as they flit overhead might be all I see of them today.
On our trek down to the creek we heard several deer in the woods cough warnings to each other that we were nearby, and naturally Daisy took off like a rocket to find them. If only I could explain to them that if they'd just stay quiet! most likely we would pass by without noticing them. Close to the creek, where the sand stays in deep shade most of the day, it is still damp from a thunderstorm we had last Sunday. Embossed in the dirt there were long trails of both deer and turkey tracks woven together in clear fresh prints. A shallow, scratched out spot in the sand showed where turkeys had had a sand bath in the last 24 hours - a turkey's version of "washing your hair!"
I settled in the middle of the dirt path close to the rippling creek to draw the Horse Nettle and Virginia Meadow Beauty that have always (since i've been here - which is 21 years) grown thickly there in the damp sand. Tufted Titmice and Chickadees, busy in a pine nearby, were making their numerous zeeeets! and chivas! a typical soundtrack for my wanderings in summer. It wasn't long before a Brown Thrasher began his mocking songs, and Yellow Billed Cuckoos started up their monkey- like calls all around. A crow cawed from the woods on the hill towards Lawson's Fork at about the same time the breeze picked up, bringing to the valley the deep and cool scent of the pine forests above me.
After lots of sniffing things and investigating the creek Daisy finally settled down and kept watch while I drew. As I was finishing up, Cicadas started buzzing in the trees, a tip that the day was heating up, as expected. I came straight home to post this, and then pack for a trip. Daisy is napping on the sofa.
********* 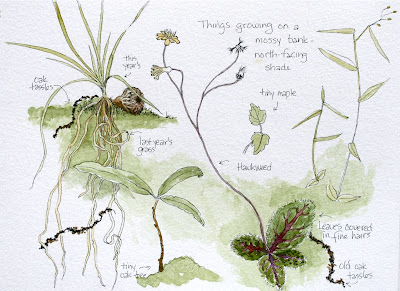 This entry was from two weeks ago when I hiked up to the rocky ridge above Lawson's Fork. This mound of moss looked like a little terrarium, except without the container...or maybe more like a miniature Zen Garden. It was a lovely collection. I include it today for the viewing pleasure of my readers.
Posted by Helen at 12:08 PM 1 comment: