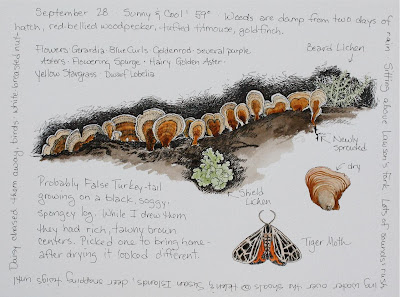 Daisy and I hiked almost to the river yesterday, stopping to admire this log full of bright and fresh False Turkey Tails. We could hear the river, running high after two days of rain, which was quite noisy as it rushed over the shoals at Helen and Susan Islands. When I sat to draw, Daisy sat close, guarding me. At one point I heard a SNAP! and turned to see three deer running away into the woods with Daisy on their heels. Oh, such a brave girl!
Before I left, I picked one of the polypores from the log and stuck it in my backpack. Later in the day I pulled out my sketchbook and the small polypore came out with it, completely changed. Instead of the rich, tawny brown color, it had changed to a fuzzy gray. I decided to record the changes in my sketchbook. The tiger moth was as gift from my son, who found it in his bedroom. Apparently it had flown into his open window and gotten lost behind the dresser. He brought it down and presented it as I was painting the False Turkey Tail - the best kind of gift for this mom!
Posted by Helen at 5:57 PM 1 comment: 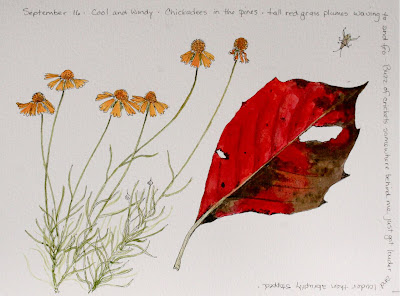 Took an early walk today and enjoyed the long morning shadows and wind in my hair. Tuesday's silence had disappeared. Instead, I heard traffic from Pine Street (we live at least 2 miles away from Pine St.) a lawn mower, a dog barking across the river, as well as the dog's owner yelling, "Shut UP!" It's amazing how noisy some days are! Along the way I found half of a bird egg, a tiny puffball that poofed its brown smoke when I poked it, and the seed pods of a sensitive brier. Fyi: if you ever see a seedpod on a sensitive brier vine, do not touch it or you'll get a handful of invisible splinters. They are so tiny it's hard to get them out. I had about ten in my hand even though I was very careful when I picked it to draw, and then dropped it immediately.
While I was picking prickles from my hand, I noticed the beautiful crimson leaf on the ground. A much safer choice for today's journal entry. I though the red contrasted nicely with the yellow of the Sneezeweed (Helenium).
Posted by Helen at 4:52 PM 3 comments: 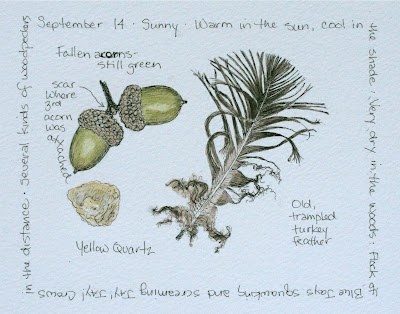 Fall is coming! The angle of sunlight, dewy cool mornings, beauty berries showing off, as well as the heart-stopping BANG of hickory nuts falling on the studio roof... these are all reminders that September is passing quickly and October is on the way!
Daisy and I stirred up three deer today as we headed down the steep, washed out hill to the lower trail. I hate doing that, and every time it happens I consider keeping Daisy on a leash. The reason I don't is because she's never caught anything, and I love to see her run. Collies are made to run. It's a beautiful site. Besides, the deer are usually so far away that there's no chance she'll even get close! Today the deer bounded away through the tall brush no more than 25 feet away, and although Daisy did head out after them, I called her back with one of the treats I had in my pocket. Happily, it worked.
Five minutes later I came upon a beautiful black racer who had been slithering across the pipeline before Daisy had run past, just ahead of me. When I got to the snake his body was tensed up, but he was still calm and looking around. He looked directly at me when I squatted down to inspect him. I had just reached over to touch him when Daisy came running back to see what I'd found. She startled the snake and sent him into a tail-rattling, curled-up-ready-to-spring frenzy. Oh, Daisy! What a nature nuisance.
I led her away and we hiked into the woods on the far hill. It is very crispy and crackly around here from lack of rain. It's been weeks, I think, since we've had significant rainfall. I sat on top of the rocky ridge for a while to draw,with Daisy settled beside me, both of us listening to the birds in the trees. They were everywhere! Red-bellied woodpeckers, flickers, very noisy blue jays, crows, a PW rattled and drilled a tree not far from us. Fall crickets called their high "cheeps" from the tree-tops. Daisy, being an unusually observant dog, looked from tree to tree, trying to find the birds.
On the way back, I stopped in the shade of some pines to notice the quiet. Not total silence, but an absence of background noise.... no wind is part of it, but it's also something atmospheric, I think. Against the background of silence all the tiny sounds of nature seemed magnified: carolina mantids buzzed as they sprang from grass stems zzzzzzzzzzzzt!, a single cricket cheeped from a grass stem - beetles chewed inside a pine trunk behind me. Various kinds of sulfur butterflies fluttered over flowers across the field; even far away I could see their floppy yellow flight, up-over-and-down. They were everywhere - hundreds of delicate wings. For some reason this brought to mind the natural force opposite that of a butterfly wing's slight disturbance - the beautiful/terrible Category-4 hurricane Igor that swirls across the Atlantic Ocean this week. Its width is the same as the distance from Dallas to DC. Take a moment to consider the differences and know we live on one awesome planet!
Posted by Helen at 11:03 PM 2 comments: 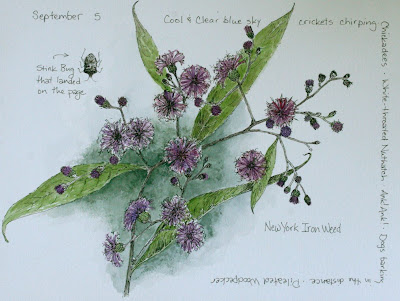 Clear, cool and breezy - a beautiful day to be outside. The ironweed this time of year is stunning, especially when it is growing next to goldenrod and wingstem! The contrast of yellow and purple does everything it's meant to do - it shocks and pleases the eye at the same time.
While I drew, Fall Field Crickets trilled all around me and a White Breasted Nuthatch worked a tree near where I sat... Ank ank! Ank ank! Ank ank! A Pileated Woodpecker screamed several times close by. A soft breeze stirred the leaves... and my hair. Like I said, it was a beautiful day!
Posted by Helen at 9:29 PM No comments: