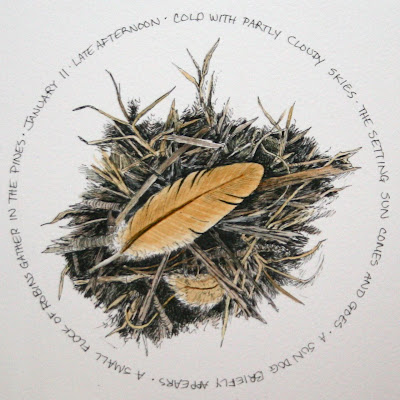 Today I took the dogs on a late afternoon hike. It was cold, although not as cold as it's been the last two weeks, and sunny - at least until I got out onto the pipeline. That's when a scattering of fat, gray clouds moved across the sun. They were beautiful, giving the afternoon sky a little dramatic "Godlight," but naturally, the clouds weakened considerably the warmth I expected from the afternoon sun. Brrr...
I decided to hike all the way to the far hilltop before I sat to draw so that I'd have some body heat built up. On the way down to the creek I passed the chicken feathers again, and hesitated, thinking perhaps I should draw them. But, no. I was in my exercise mode and did not break my stride to pick up the feathers. Across the creek I went, and up the steep, far hill. All the while the sun came and went. The dogs zoomed ahead, ran in and out of the woods, then dashed back to jump and lick and generally show me their happiness.
Finally I sat to draw. I pulled out my pens, my journal, and looked around. The first thing I saw on the ground beside me were two small chicken feathers. One was about three inches long, the other less than an inch. I had to laugh! It appeared that it was meant to be. I drew them where they sat, among unremarkable twigs, stems, and grass.
An hour and a half later the pale sun disappeared behind a line of pines at the crest of our hill. Chill air settled around me and made me shiver. I absolutely had to stop drawing and get moving again. Daisy and Radu seemed to feel the same way - they led the way home.
Posted by Helen at 7:20 PM

Love the drawing as usual. Venture out again tomorrow - it should be really nice then. It was beautiful here in IL today, nearly 50 degrees! The snow is starting to melt except for the drift areas. I can't wait for them to be gone and warm again.

I really think your feathers are so realistic looking. I can't even think about sitting in the woods in the cold drawing.