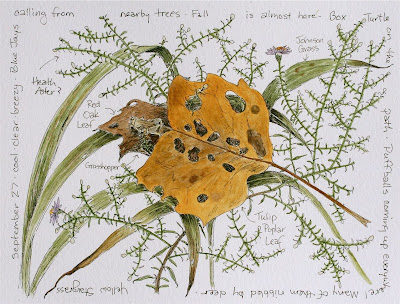 Every now and then a day comes along when things seem to go against my natural inclination to wander slowly around in nature, and then to settle down to draw. This was one of those days. It started with the dead cell phone (no way to tell time), and moved on to the dead camera battery (the plan was to get photos of the snake skeleton and several mushrooms I'd found yesterday). Then there was the addition of our neighbors' two hounds to the already crazy mix of Daisy and Stewie (four dogs underfoot does not make for a peaceful hike). They came bounding through the woods just as we headed out.
Midway through our outing, the bigger of our neighbors' dogs found something dead to roll in, and despite my frantic calling and attention-getting antics, Stewie ran right for the stink and threw himself onto the ground to rub his shoulders in the stink. Oh yeah, one shoulder isn't enough - he stood, turned and threw himself down on the other shoulder. Daisy put her nose in the air and pranced on, too lady-like for such behavior.
And so I moseyed on, holding my nose, and with my odiferous companions bouncing happily in front of me. The day shone brightly, with early autumn sunrays striking the beginnings of many fall blooms: Yellow Stargrass, Goldenrod, Blue Curls, Gerardia, Lobelia, as well as Goldenaster, New York Asters, three different Thoroughworts, and Heath Asters, which are just beginning to open their pale stars. Large Puffballs had popped up all over a portion of the pipeline, and some had been nibbled on by deer the night before. We came upon a Box Turtle, but one of the hounds pounced on it and startled it, and made it disappear into his shell. A Pileated Woodpecker called occasionally as he flew from tree to tree to let his mate know where he was.
Somewhere along the way I noticed this Tulip Poplar leaf sitting atop a tangle of asters and grass leaves. I stopped to look, and discovered that beneath the poplar leaf was a red oak leaf, and on the oak leaf sat a Carolina Grasshopper. Aster branches poked through holes in both the oak and poplar leaves.
As I considered what might happen if I tried to sit and draw, the dogs noticed that I'd stopped. They turned to gaze my way. I did my best "walk-two-steps-forward" to fake them out (See, I'm still walking!) and sure enough, they ran on. Then, rather than sitting, I took my journal out of my backpack and drew standing up... which is neither meditative nor peaceful, but still fun! The intricacies of the tangle fascinated me. It seemed like a puzzle - grass goes over this aster branch, under that one, disappears beneath leaf only to come out down there...
So, I'm not sure which came first. Did the leaves fall onto the aster just so, so that the tips of the stems poked through the hole? or did the aster grow up through the holes. No one will ever know.
But then, who but me will ever care?
The stinky dogs did end up coming back to sit for a while. They were close enough to me to that I got some delightful whiffs of their perfume. Two mosquitoes also visited. I took care of them, then scratched my bites occasionally. Still, it was a great morning. 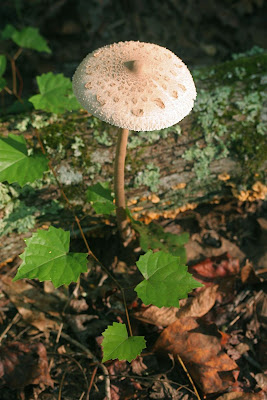 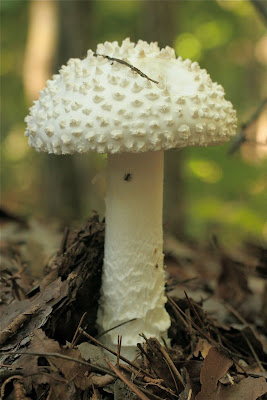 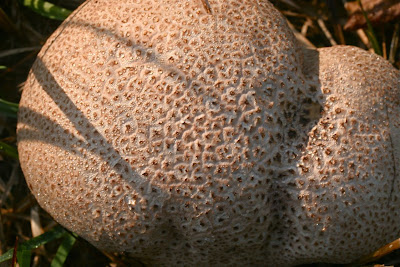 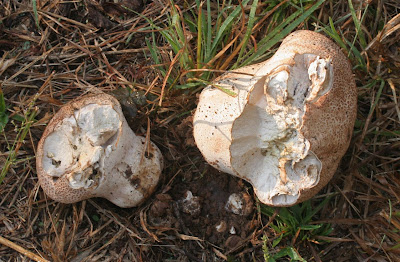 (Went back to get photos of mushrooms. From the top: Parasol, White Amanita, Gem-studded Puffball, two puffballs nibbled by deer.
Posted by Helen at 7:19 PM