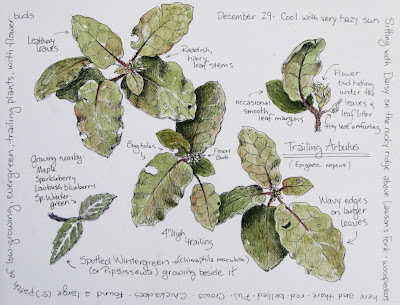 On my hike today I heard raucous crows in the woods, fussing up a storm. This usually means a hawk or owl is in their territory, so I hurriedly slipped and slid down the still-snowy hill, hoping to see what was happening, or at least get there in time to see what it might be. As I approached, the sudden scream of a Red-shouldered Hawk echoed from the crow-crowded spot. Over and over he shrieked, while the crows screeched and cawed and flew out from a pine tree and back again. Their mobbing was such a noisy affair... the hawk must be in that tree. As I crept closer, and at the same time held Daisy to keep her from racing ahead, the crows saw me and flew away, squawking. After a moment of silence, the hawk flew out from the pine, still screaming. He landed on a bare oak branch very close to me and kept screeching, over and over and over. What is he so excited about? Is he fussing at me? I wondered. I also longed for my camera. The bird was close now, and was perched at a great angle for photography. Through binoculars I watched him cry out continually from the branch. About two minutes later, he flew screaming back into the pine and then... out of the pine flew a huge, dark and silent Great Horned Owl. The noisy hawk was on his tail as they flew off into the treetops.
Thirty minutes later I found these small, evergreen plants (above) on the steep north-facing hill above Lawson's Fork. I poked around under the leaf litter and saw that they were trailing plants, and then I saw the flower buds so I knew it would be an early bloomer, but I still didn't know what it was. That means research! One of my favorite things about wandering the woods is finding something new, and then digging into my field guides to identify it. Turns out they are Trailing Arbutus plants that bloom in early March with spicy, scented flower heads in pink or white. I've heard about them, but never seen one.
On the way back home I came face to face with a deer antler wedged in a small tree.... probably exactly where the young deer stopped last spring to rub his antler, and then lost it and left it. A fun find.
Later, I looked up the Red-shouldered Hawk and found this fascinating mention of what I'd seen in the woods:
"Although the American Crow often mobs the Red-shouldered Hawk, sometimes the relationship is not so one-sided. They may chase each other and try to steal food from each other. They may also both attack a Great Horned Owl and join forces to chase the owl out of the hawk's territory."
www.allaboutbirds.org
(Cornell Lab of Ornithology)
What a day!
Posted by Helen at 6:23 PM

There is something special about someone who can not only draw and sketch nature as well as you can, but also write as well. Or rather "write well, as well."

I do so enjoy your posts.

Thank you so much, Clare!

Love the ending. It must have given you a thrill to read about the exact thing you witnessed! Hey, even the sparrows on my feeder are snippy, aggressive little things -- It tickles me to watch them fuss and shove at each other. The big ones are just ... bigger!