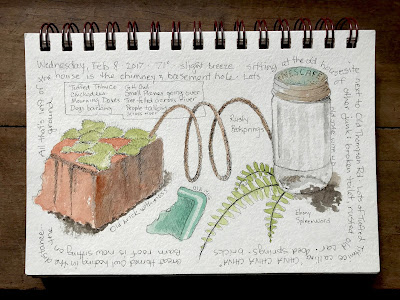 Last month I spent an hour or so at an old homesite in the woods just above Lawson's Fork, where over the years humans have left their stuff. A quick glance would take in the old chimney, the basement hole, and maybe the pipes or the barn's angular tin roof resting on the ground, but a lot of what is there is being eaten by the forest, sinking into the rich black soil of the spot.  Bricks covered in moss are everywhere, as well as old rusty springs, remains of an old truck, and glass bottles and jars.  I found pieces of an old turquoise mug that had broken years ago, and a little Nescafe' jar with its lid.  That one came back to the studio to hold pencils or paintbrushes, but other jars have become greenhouses and are full of moss, grass, or the small fern called Ebony Spleenwort.

Remember when "tin cans" had to be opened with the pointy side of a "church key" opener?  There were a lot of those punched, rusty cans around, although difficult to pick out from the leaf litter. But take your time and you start seeing other things.  Once I found an old automobile horn (the kind that was outside the window and had a bulb at the end to squeeze for a honk), and down in the earth, a bottle that had once held some yucky "black draught" medicine. Tiny bits of the history of Spartanburg County.

love your drawing and painting!